​It’s easy to get caught up in the gladiators, the emperors and of course, the Colosseum.

It’s all very intriguing.  And overwhelming. Especially for teachers who are new to the topic and definitely to the students.

And for those teachers who have been teaching this curriculum for a while, it is easy to forget how bombarding it can be to our young sixth graders 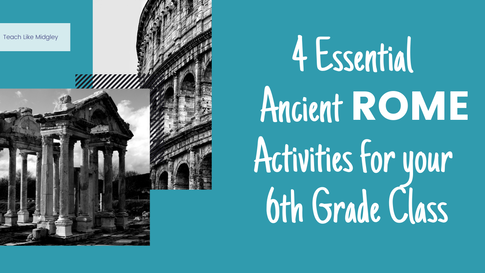 ​That’s where teaching with a structure can really help.  It gives you a framework for developing your lesson plans, and also gives your students a focus for their studies.

History class was always a struggle for me when I was a student – yes, I promise you that it’s true. Which is probably why I’m so passionate about teaching the way that I do.  I know exactly what it’s like to be a struggling student who is completely overwhelmed with no idea what to focus on.

If you begin using the 7 part structure at the start of the year with ancient Mesopotamia, you are certainly setting your students up for success at tackling ancient Rome.

Ancient Rome always feels like the biggest, longest unit of the entire year.  The multiple changes in forms of government.  The controversy over religion. The vast expanse of the empire.  It builds up and can be a lot to comprehend.

But when your students already have a solid understanding of the 7 part structure, then they know exactly how to tackle the unit.  And they know exactly what your expectations are – so they are able to meet them with confidence.

This post will help you incorporate 4 essential activities to include within your lesson plans, so your students can find success in your history class.

#1 The Brilliant Location of Ancient Rome

We know that every unit must begin with location.  However, the brilliance of ancient Rome’s location is must to explore and discuss.

Yes, the Ancient Roman Empire expanded to include portions of 3 continents.  Nothing short of impressive.

But the start of Rome, began on the 7 hills near the Tiber River on the Italian Peninsula.

Those 7 hills provided fertile land by way of volcanic ash, but also an amazing amount of protection.

The Italian Peninsula had many rocky cliffs and very few places to make port. But Rome was just 15 miles up the river, from the Tyrrhenian Sea. Which meant there was access to the sea, but protection from other sea travelers as well.  Anyone wanting to attack Rome by boat, would have to funnel their ships up the river, one at a time, making it easy for the Romans to defend from the hill tops.

Add to that the protection from land attacks thanks to the Alps and Apennine Mountains, and the location of Rome was totally brilliant. 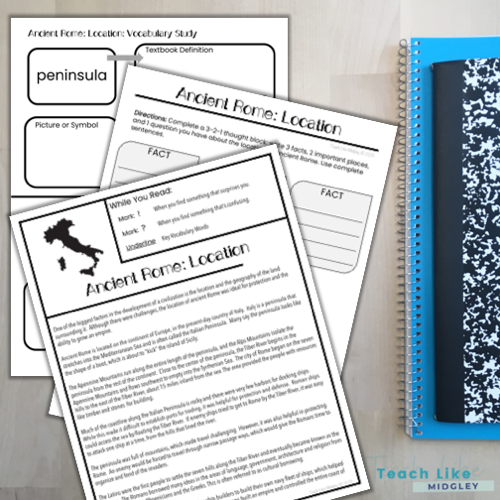 #2 The Romans were Copy Cats

Many aspects of the ancient Roman civilization were built on the ideas of others.

Multiple ideas were built on the ideas from the ancient Greeks.  Their written language was based on the Greek alphabet.  Their architectural design, particularly the column structure was also based on ideas from the Greeks.

Most importantly, the government of ancient Rome was built with outside influence.

The Etruscans were experienced at ruling large areas, and organized Rome’s territory into districts that were easier to manage.  With organizing the army, overseeing large building projects for defense, and expanding territories, the Etruscans set Rome up for success. 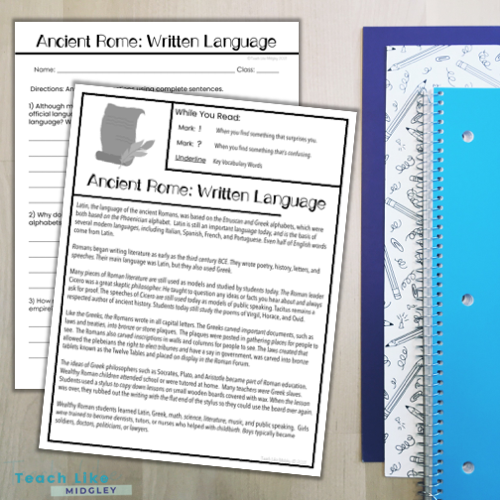 #3 Multiple Changes in Form of Government

Often times the thought of ancient Roman government makes one think of the Roman Republic.  But there were many other forms of government that took shape in ancient Rome.

Ancient Rome started with a monarchy. And was even ruled by the Etruscans for a time.  But the Romans soon learned how risky it was to have one person with all of the control. And so, they developed the Roman Republic, which was tripartite in nature with a senate, an assembly, and two ruling consuls.

With time, corruption lead to the downfall of the Roman Republic.  Many historians consider it to have officially come to an end with the dictatorship of Sulla, that lasted for 3 years.

Next came a triumvirate, where three men shared power: Pompey, Crassus, and Julius Caesar. The ambitious Julius Caesar became consul, won the support of the people, and then with the strength of his army behind him, declared himself dictator for life.

After the senate’s assassination of Caesar, another triumvirate came to control Rome.  This one included Lepidus, Marc Antony, and Caesar’s heir Octavian.

After more civil war, Octavian ultimately out maneuvered both Lepidus and then Marc Antony to become the first official emperor of Rome.

From there ancient Rome saw many emperors, some good and some not so good.

The rise of Christianity brought years of religious conflict. Once Christianity became the official religion of the empire, more unrest and political change came with the power of the bishops and the pope. By AD 395, the empire split in two, never to be united again. 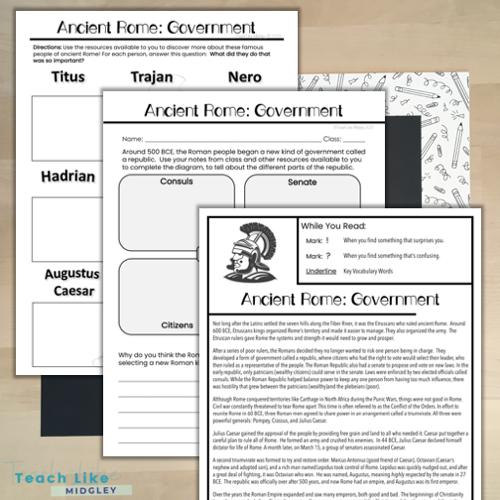 #4 The Empire Destroyed Itself

Many civilizations in history came to an end because they were conquered or their settlements abandoned from natural disasters.

But not ancient Rome.  The Roman Empire began to crumble from within, making it weak from the inside out.

Yes, the empire was invaded.  But if it hadn’t been for the internal weaknesses, those invaders likely never would have even tried. 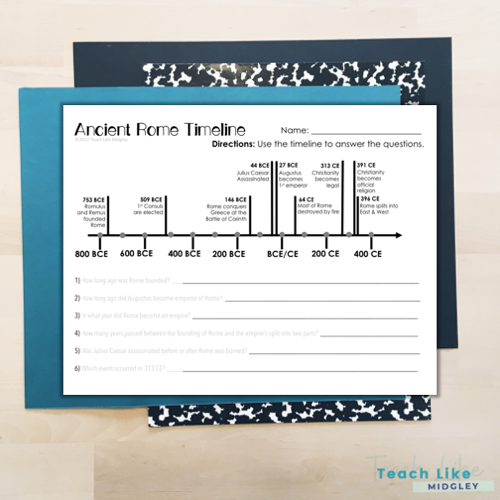 There are many more lessons you can include with your unit on ancient Rome, but these 4 items are at the core and should not be left out.  If you are looking for more guidance as to what to include, then be sure to utilize my FREE Planning Guide.

It’s always best to use the resources that are provided for you by your school district.  However, as many of you know, not every teacher is provided the materials they need. Which is exactly why I developed a line of Ancient Rome Lesson Sets that will provide you with everything you need to teach each essential concept to your students. 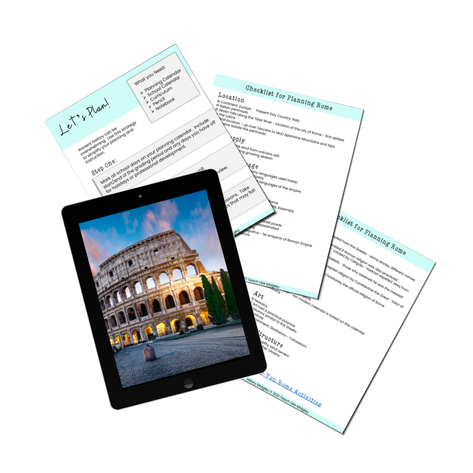 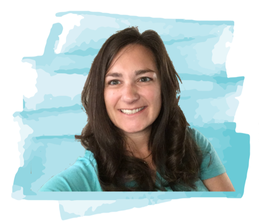 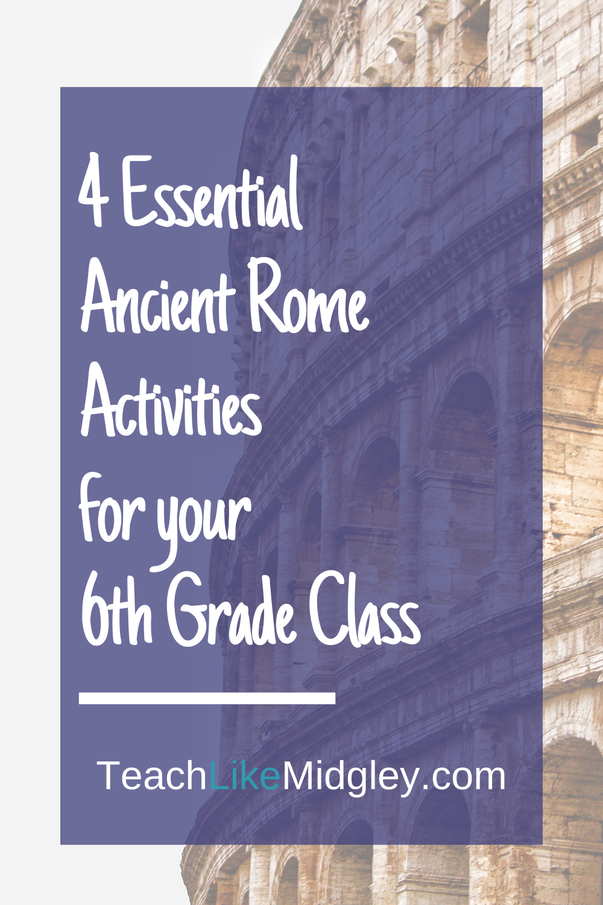